A husband suspects his wife is having an affair with a pilot, but she keeps denying it until finally the husband just knew when his wife said:

One day the tower received a call from an aircraft asking: “What time is it?”

The tower responded: “Who is calling?”

The aircraft replied: “What difference does it make?”

In a somewhat cocky tone the C-5 crew says: “50 to a 100 thousand pounds more than you. What are you guys grossing today?”

A minister dies and is waiting in line at the Pearly Gates. Ahead of him is a guy who’s dressed in sunglasses, a loud shirt, leather jacket, and jeans.

Saint Peter addresses this guy, “Who are you, so that I may know whether or not to admit you to the Kingdom of Heaven?” The guy replies, “I’m Joey Shasta, retired pilot, of Pittsburg, PA.”

Saint Peter consults his list. He smiles and says to the pilot, “Take this silken robe and golden staff and enter the Kingdom.”

The pilot goes into Heaven with his robe and staff.

Next it’s the minister’s turn. He stands erect and booms out, “I am Joseph Snow, pastor of Saint Mary’s for the last 43 years.” Saint Peter consults his list. He says to the minister, “Take this cotton robe and wooden staff and enter the Kingdom.”

“Just a minute,” says the minister. “That man was a pilot and he gets a silken robe and golden staff. How can this be?”

“Up here, we work by results,” says Saint Peter. “While you preached, people slept; while he flew, people prayed.”

Airspeed: Speed of an airplane. Deduct 25% when listening to a Navy pilot.

Bank: The folks who hold the lien on most pilots’ cars.

Cone of Confusion: An area about the size of New Jersey, located near the final approach beacon at an airport.

Dead Reckoning: You reckon correctly, or you are.

Engine Failure: A condition which occurs when all fuel tanks mysteriously become filled with air.

Firewall: Section of the aircraft specially designed to let heat and smoke enter the cockpit.

Glide Distance: Half the distance from the airplane to the nearest emergency landing field.

Hydroplane: An airplane designed to land on a 20,000 foot long wet runway.

IFR: A method of flying by needle and ripcord.

Parasitic Drag: A pilot who bums a ride and complains about the service.

Range: Usually about 30 miles beyond the point where all fuel tanks fill with air.

Rich Mixture: What you order at the other guy’s promotion party.

Roger: Used when you’re not sure what else to say.

Service Ceiling: Altitude at which cabin crews can serve drinks.

Stall: Technique used to explain to the bank why you car payment is late.

Ladies, have we forgotten anything? 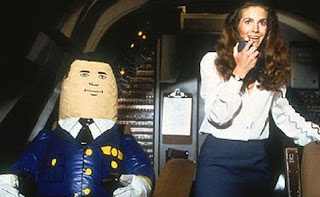