If you have ever stared outside of an aircraft window wondering just what you are seeing below you or what is below you, the Royal Geographical Society has teamed up with the Institute of British Geographers to come up with the Hidden Journeys Project. Specifically, the web portal contains 15 amazing flight paths from around the world that you can explore, interact with and add pictures to once you have flown or visited the destinations on the actual route. 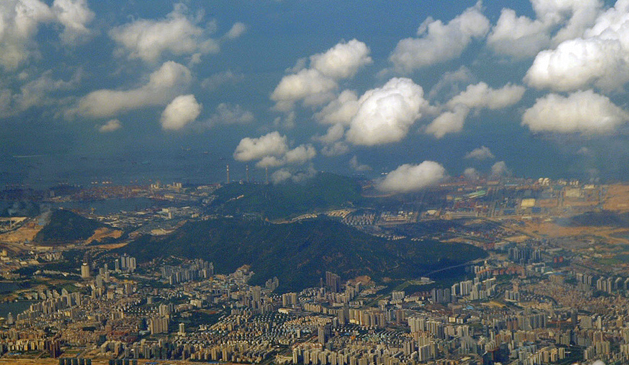 (Why wasn’t geography this beautiful when I was in school? All I can remember is tedious facts about the steel industry in Belgium and the difference between a church with a tower and a church with a spire as seen from an Ordnance Survey map.)

Steve, the blogger behind A mile of runway will take you anywhere, has written a very lengthy post about how to create great flying videos. At the beginning of his post, Steve listed the following equipment that he uses:

(Full disclosure: Steve works for Kodak – hence there might be some bias in the equipment he chooses to use as he gets an employee discount)

Steve noted that he flies both a Cessna and a Cub and these aircraft require a different setup and mounting system. In a Cessna, Steve will attach a RAM Suction Mount to the side of the windshield that is to the left of the pilot while in the Cub, he will attach a RAM Yoke Mount to the tubing inside at the top of the cockpit so that the camera hangs upside-down (he then rotates the video 180 degrees using software).

Steve also added that if he wants to capture audio, his current equipment dictates that he needs to use a portable intercom. When he is flying Cessnas, he will plug the intercom into the pilot or the co-pilot’s position and then use a 3.5 mm stereo audio cable from the intercom up to the camera. However and in the Cub, Steve will rarely wear headsets and hence, he never captures intercom audio.

If you intend to take video along with audio of your flying adventures, then Steve’s entire and very detailed post is a must read.

3. PICTURES: Extent of peripheral damage to Qantas A380 unclear

Our vote for the number one aviation picture of 2010 would also go for the photo of Finish air force Hornet’s engine after it had inadvertently flew through volcanic dust from the erupting Eyjafjallajökull volcano in Iceland.

However, we would also like to ask you our readers if there are any 2010 aviation related photos that Flight Global or us have missed that are worthy of being in the top 10. If so, feel free to post a link to the photo below.

Matthew Keller, an Alaskan native and the owner and operator of Blue Ice Aviation, has recently posted this amazing picture of his aircraft in a boulder patch up in Alaska. However, he did note that the actual landing strip was more user friendly than it appears in the picture he took.

Nevertheless, he did note that while his US$10,000 hydrosorbs landing gear system can absorb the impact of a hard landing, he tries to avoid such landings due to the wear and tear that they cause. Moreover and while his Super Cub is rugged, he wrote that the aircraft still has its limitations plus he is often flying around fully loaded with both equipment and passengers.

If you want to see more amazing pictures and videos of flying around Alaska, be sure to check out the blog of Matthew’s company.

Summer is here and summer on the Great Plains and in the Rocky Mountains means thunderstorms. Hence, the Southwest Airlines blog has posted this downright EERIE photo of a thunderstorm cloud that recently appeared over the Denver Airport and is definitely something that you would want to fly AROUND! In addition, Sulako, the pilot blogger behind Sulako’s Blog, has posted four videos of recent thunderstorms over the Great Plains and he ended his post by saying:

Due to our exceptional cunning and skill (read ‘luck’), the air was smooth the entire flight, and the passengers remained blissfully oblivious to the amazing forces of nature we observed during our run. "Hey pilot, nice flight, I’m glad the weather was good" Oh, if they only knew the planning and plotting and scheming we had to do several times enroute to make it so – but I guess one of the things I get paid for is to attempt to bore the passengers to tears during the flight, even if I’m sweating a bit.

Definitely sums up what being a pilot is all about!

Hat tip to Jon Ostrower for posting this amazing photo by Liz Matzelle on FlightBlogger. The photo seems to show the “crowded airspace” over Seattle but according to Liz:

Did some VERY rough math, and I *think* that the C-17 was at around 6,250ft while the CRJ was around 3,000ft. I was at Boeing Field but the CRJ was landing at SeaTac, and I know that the pattern altitude at Boeing Field is 800ft, and it makes sense that the CRJ would be another couple thousand feet above that, so I believe those numbers are at least roughly accurate.

In other words, the photo is completely authentic!