Steve, the blogger behind a mile of runway will take you anywhere blog, has recently written a lengthy post about a recent flight trip where he had to make a decision between flying safely verses what is legal. Steve began his post by writing:

There’s a saying amongst pilots that you can fly 100 hours or fly the same hour 100 times. Today was most certainly not the latter. We ended up safe and sound, which is the important thing, but I probably pushed my personal limits a little too far in the process.

Here is what happened: Steve and his wife were on a flying trip from Ohio to Syracuse when the flying conditions slowly started to deteriorate. In the post, Steve pointed out that weather type of reports tend to only be accurate at the airports where they were taken. Moreover and the part of Ohio that Steve is from is fairly flat while the rolling hills of Pennsylvania can cause clouds to behave differently.

To make a long story short, Steve kept heading to his destination, even after passing an airport that did not have another airport within a 20 nm radius (a 1,250 square mile area), when the clouds started getting lower and the terrain started getting higher. Hence, he was forced to turn around and land at the nearest airport – that also happened to be 20 miles outside of town and not near any restaurants or hotels (unlike the airport he had just take off from).

Steve ended his post by reiterating that weather patterns in unfamiliar locations can be very different from what a pilot is used to at home. He also noted that from a legal standpoint:

…not one thing today would be cause to raise an eyebrow. Yet I can certainly see how my decisions easily could have been the beginning of an accident chain. Legal? You bet. Safe? I’m not so sure about that part.

A very good point indeed. Steve’s entire post is well worth reading and as usual, he has included some great aerial photographs from his trip. 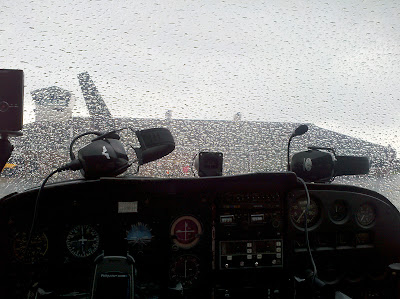