We have already noted the quest to find Spitfires in Burma, now known as Myanmar, but now there are reports that there could be as many as 140 or three to four times the number of airworthy ones known to exist and just waiting to be dug up in the country. Moreover, the Spitfires are believed to be rare Mark XIV fighters equipped with the more powerful Griffon type of engine rather than the more famous Rolls-Royce Merlin engine.

The Spitfires had been brought to what is now Myanmar near the end of the war inside crates about 12.2 meters (40 feet) long, 3.4 meters (11 feet) high and 2.7 meters (9 feet) wide but the war ended before they could be unpacked and put into action against the Japanese. It was actually the US army that was in charge of burying the aircraft and British aviation enthusiast David J. Cundall, who has been leading the search for them, has apparently interviewed over 1,000 mostly American war veterans to try and determine their fate.

After searching since 1999 for the locations of the Spitfires, Cundall has since negotiated a two-year contract to recover 60 planes in the first phase with any others to be recovered in a second phase while the Myanmar government will get one plane for display at a museum along with half of the remaining total. DJC, a private company that Cundall heads, will get 30% of the total while his Myanmar partners will get 20%. 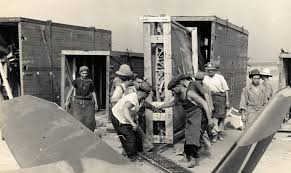 Of course, I do have to be skeptical as to how well any crate has held up after being buried for close to 70 years in a tropical country with a monsoon season plus one has to wonder whether any locals have gotten to the sites first when the country was largely isolated from the world to sell anything they found for scrap. And if they only find a few Spitfires in good condition, who gets to keep those – Cundall, his local business partners or the Myanmar government? In such a case, things could get rather messy.

Hence, we want to ask you our readers what you think: Will they find any Spitfires in pristine condition or a pile of rust/rot or nothing at all or just end up squabbling among themselves over what is found? Tell us what you think in the comments section below and we would love to hear from anyone who served or had a close relative or acquaintance who served in Burma.