This is a guest post from my friend Hani Dabbagh. He says: “I am a private VFR pilot based in Geneva, I started flying about the time I became a father, some 19 years ago. I always try to combine my passion of flying with my family, going on trips together. I enjoy seeing the world from above and discovering new places, the journey itself being as important as the destination.”

We were not used to such luxury. There was someone waiting for us in a “Follow Me” car; another brought the fuel truck right to our plane while his colleague was tying it down, all of which was capped by the courtesy bus to the terminal. We had just landed in Pula, Croatia, after about 3 hours of flying over a stunning and varied landscape of mountain passes, lakes and the sea – not to mention the unique view of Venice. It’s been a long time that that my 19 year-old son Nabil and I had been intending to fly to Croatia. As the flight required particularly good weather to cross the Alps, however, we were constantly postponing it. Finally the weather gods smiled on us and the forecast for our date of departure as well as the next few days was nothing short of gorgeous. There was a question about some instability a few days later, but nothing was certain that far ahead as far as weather was concerned. It was thus time to give Croatia a try. We had heard much about its crystal clear waters, beautiful coastal flying, and the VFR-friendly airspace – as well as its beautiful historic towns. It would be a good change from our more “conventional” destinations. 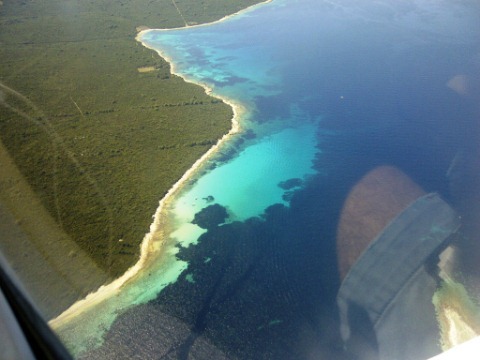 Our friends and fellow pilots at the Aeroclub de Genève gave us some good hints and tips about where to go and we planned a flight that would take us from our home base of Geneva, over the Simplon Pass, to Lugano, then north of the various controlled zones of the two Milanos, Bergamo and Brescia towards Venice. This covers a beautiful landscape in a juxtaposition of mountains and lakes. Our Piper Dakota took us over the lakes of Maggiore, Como (with a seaplane aerodrome) and Garda. We wanted to avoid entering and exiting the numerous controlled zones in order have a little more freedom of movement. This consequently required some careful zigzagging, specially around Milano, where airspace restricted us to 1000ft, as well as some deft conversations with all the controllers. Luckily Nabil took over this task, which helped me concentrate on flying and navigating. Nabil has become very confident in his radio skills and it was a pleasure to hear him speak with such assertiveness and authority. Once over Verona and Padova, the radio chatter calmed down a little and we were able to relax some more and simply admire the gorgeous view surrounding us, specially the one approaching Venice. We flew at 5000 ft and had a clear view right across the horizon, showing Venice jutting out of the sea. We could clearly see the runway at Venice Marco Polo airport – in fact we were flying just above its approach path. The Italian controllers were very friendly and cooperative all the way up to the point Rotar, upon which they handed us over to the Croatian controllers. We adjusted to a new accent, but the friendliness and cooperation did not alter. This was typical of all our flying in Croatia. Controllers were always helpful and efficient, very often expecting us upon handovers, and identifying us on radar before even getting the chance to contact them. Pula Tower cleared us to land on Runway 09, minutes before a Boeing 757 from Russia. The Follow-Me car directed us to our parking slot and the marshal tied down our plane, as the fuel truck arrived. We were given a VIP treatment at the airport terminal, where we cut through the long queue of Russian tourists at passport control – the same people we had just overtaken on landing!

We took the taxi to town and asked to be driven to the Tourist Information Centre. The taxi driver deposited us nowhere near there, and was our first encounter with a less-than-warm Croatian welcome. We experienced this at a couple of other places later during our stay, most notably with an obnoxious lineman at Mali Losinj airport who was downright impolite. But these encounters were more than compensated by the positive experiences we had elsewhere and overall we came out with a positive perspective. It was clear to us that Croatia is doing its best to attract tourism, manifested by a good infrastructure and service.

Pula, and indeed Split which we visited the next day, reminded us very much of small Italian towns. Narrow streets with a teeming evening life, coffee shops with outside tables, all accentuated this feeling. That wasn’t the case with food however. Italians won that score easily. Perhaps it was the touristic restaurants we frequented, or simply bad luck, but we can’t say that we were overwhelmed by the cuisine – with a notable exception at Mali. The flight down the coast to Split was memorable. It followed a VFR route called AD1 that took us over a coastline of crystalline waters of varying shades of blue, sprinkled with boats that seemed to hang in mid-air, their shadows visible on the sea floor, and islands galore. We were flying at 1500ft with visibility as good as the eyes can see, and a sky a slightly different shade of the sea, the engine humming along with all instruments in the green and the radio happily quiet. We were in flyer’s heaven. This was a poster-image of flying and we nearly had to pinch ourselves to make sure it was real.

The arrival at Split followed the same service as Pula, but where Pula was extremely helpful in filing our flight plan for departure, Split was very heavy and frustrating in administration and we lost considerable time there. Our next stop made up for this, however. Mali Losinj is a beautiful island resort with a small aerodrome for light aircraft. Just the way we like it. It was a welcome, refreshing, change from the large airports of Split and Pula. Although small, it had all the required amenities including fuel and Customs. The latter was very useful as it allowed us to leave the island straight to another country, without needing to divert first to a larger airport. At Mali we swapped flying for a program of deck-chairs at the beach. We broke our rhythm with a little bit of ping pong, and ended the day with an evening stroll at the leisure port, where we had a very good dinner. It’s a tough Life!

The pending storm finally arrived the next night. It was pouring down heavily and contrasted so much with the previous few days of sunshine. Luckily the forecast called for the storm to pass through by early afternoon, leaving the way for the return of sunshine. This comforted us and we whiled away the hours by watching a movie on Nabil’s PC. True to form, the clouds started to break up as predicted and a quick view of the metars and tafs of the airports on our return path comforted us in our decision to commence our flight back home. We took the same route back, thought this time we decided to take the short cut and flew straight into the controlled airspaces of the major airports along the way. This was no problem with the friendly controllers. A little stop at Lugano for customs, fuel and coke (I mean the coca-cola variety) gave us a welcome respite before crossing the Alps. Another gorgeous evening awaited us for another memorable – though very different – flight over imposing and beautiful mountains, coming up very close to Mont Blanc. The air was stable; there was no wind, and visibility was again unhindered. From 1500ft at the Croatian coast to 9500ft weaving in between Europe’s highest mountains, we were reminded of how incredibly privileged we were.

Four days and 9 hours of flying later, we heard the familiar voices of the Geneva air traffic controllers again, and we felt at home before even landing. It was 4 days of adventure, 4 days of discovery and 4 days of invaluable complicity with my son. What a blast!

I am looking forward already for next year with my daughter!